What a great week! We worked super hard with D. and his family and they're incredible! We also are going to begin today to work with a man named E. His girlfriend is a FANTASTIC recent convert named L, and she really wants him to get baptized so that they can get sealed in the temple! We normally don't put lessons on Mondays but seeing as how this is the only day that he can see us, we have a lesson with him soon at 4, so I won't be writing that much this week. We hope to get these 2 families baptized so that Elder Howard can get a few families sealed in his second year!

It is amazing to me how in these past few weeks we've been finding people to teach. Throughout my entire mission, having people to teach is all about how well WE work each day, how many WE can find, how many doors WE can get opened. Here, in the final stretch of my mission, I am learning in a much deeper way that it's not US. It's HIM. This is HIS work, and He can do His own work. We are nothing more than servants in His hands. All the people that we have been teaching are nothing short of miracles, where all our work had apparently nothing to do with finding them. That's God's grace.

I've learned that God's grace is really free. It's like how when a little kid's parents pay for him to get piano lessons. The price is paid, the deed is done, now there is only one thing left: get good at piano! But if the kid chooses not to listen in his classes, if he chooses not to practice, well, he will only learn a little bit of piano, as opposed to everything that he could have learned! It is the same for us. We are here on this earth to learn to live with our Heavenly Father. This is done by keeping His commandments and by living the gospel of his Son. Those are the celestial laws that He abides, and we must learn to abide them too if we are to return and live with Him. The price was already paid. It was paid with Jesus Christ, in the garden of Getsemane, upon a cross, and within an empty tomb. Salvation is free! It only depends upon us, if we want to prepare ourselves and learn, or not.

News from the family: We got an official return date on Monday! It's June 29!

Posted by Cordell Thompson at 7:59 PM No comments:

Turns out I'm not the one from the prophecy.... 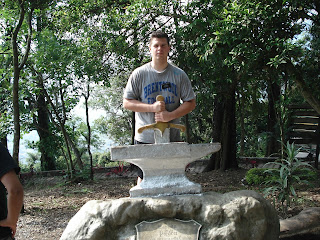 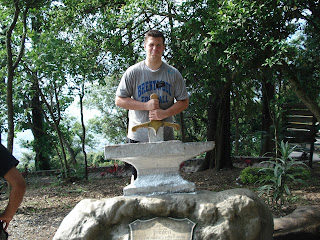 Well. I feel different. Today is the start of my last transfer in my mission. A transfer is a period of 6 weeks. In between every transfer there are different changes with the missionaries. There are 17 transfers in a mission. This is my number 17. I never thought I would feel any different but I do. I always knew that the mission was going to end soon but now it's like I can see the finish line. And I don't want to cross it...

Anyways, we'll make sure to do our best this transfer. I'm still with Elder Howard, so it's pretty certain that he'll be my last companion. We're going to work hard and try to get the restored gospel to as many people as possible.

This was a pretty special week. On Tuesday we had a visit from a seventy named Elder Falabela. He's from Guatemala. He taught us about the atonement of Christ and about charity.

On Monday night I found a little black scorpion in the house. I killed it. I hope there aren't more. But our roof is made out of tin with a weird barrier right below it and they say that that's a really good place for scorpions to be. The good news is that apparently these ones aren't lethal, they just hurt a ton.

We had a really special experience this Saturday. Elder Howard has been really sick this whole week so we decided that it was time for him to go to the doctor. So we went to the doctor and he diagnosed him and gave him medicine. But long story short, he sent us to another doctor that lived about 40 mins away in a place called Ixpan. We had no clue how to get there so we just hailed a taxi and said where we were going. When we got in, the taxi driver introduced himself, told us that he had lived in Phoenix for 6 years working for a constructioin company, and that his 2 bosses were Mormons and that they were some of the best people that he had ever met. He told us all about them, and about what he thought about the world and everything. He ended asking for us to come and visit him, and so we scheduled a lesson! We're super excited to see him. This was a lesson to me on the impact that living like a real Christian can have on people even years into the future.

I'm grateful for those 2 men in Phoenix that made an impact on this man's life, and we hope to be able to make one too. He said something that really made me think: "You can tell me all about what you believe, what you think, and who you are, but all I have to do to know you is to watch you. How a person acts, even when they think that no one is looking, is the perfect way to tell who they really are. And every time I've met one of you guys, you're living like Christians."

Integrity is what we do when we think nobody is looking. It's the outward reflection of the inner mind and heart. We cannot become like Christ unless we have integrity.
Posted by Cordell Thompson at 3:27 PM No comments:

The white peak is Orizaba. It is the third highest peak in North America. It is way taller than it looks in this picture. 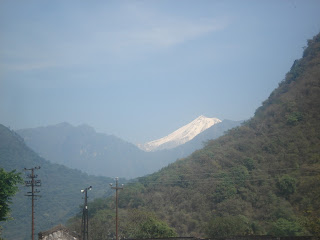 These wings just sprouted out of my back. 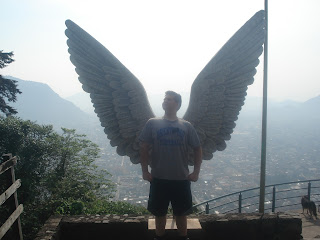 ​This is me and Elder Howard. 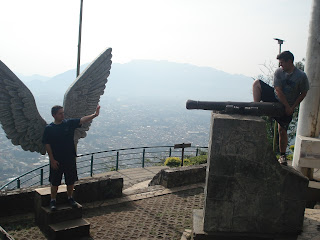 ​​
Me, Elder Howard, and Elder Zuniga 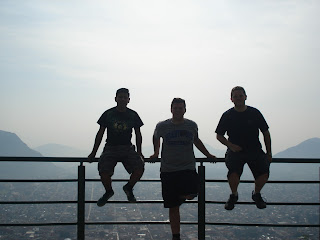 Scripture of the Week:

4 For after much tribulation come the blessings.
So this week was a fullfillment of that scripture!!! We've been working for 4 hard weeks to just try to have a little bit of success. And now it's starting to pour in!!! 4 weeks in a row with not a single investigator in church, I was worried!!! But we worked hard, and this week we finally had 5!!! What a miracle!!!
I'm so relieved, I feel like it was all for something, and that's the best feeling in the world. All 5 of our investigators that went to church are great, and we're expecting more next week.
The other highlight of the week was being able to talk with my family last night. It will be the last time I talk with them until I go home. I hope to keep working hard and bring a few more to Christ. I still got a bit of fuel left in me.
That's all I have to say this week, other than this: I really do believe that Jesus Christ is the Saviour of the world, and I really do believe that this is His true church. I know that what I am doing and what I have done has been pleasing to Him, and I think that's the most important thing in the world. He is the Rock of Eternity, and He was cleft for us, that through His death and resurrection, we too may live again, in the presence of our immortal Father and King.
​
Posted by Cordell Thompson at 8:43 PM No comments:

Orizaba is normally a cool climate (for Mexico, aka not THAT cold) but this week, we were in some record breaking heat! I practically forgot that we were in the mountains and had nightmares that the whole world became one massive pit of death from heavy sunlight. But it was a fun week.

We found several really cool people to teach this week. L is this middle-aged guy whose daughter lived in the U.S. for 6 years, in Salt Lake City. He went to visit her and they toured the temple grounds and the church visitor's center, and were very intrigued. Then they came home, and later we just randomly show up, knocking on doors! Cool experience. We were able to teach about the Restoration and we will be seeing them again on Wednesday! Second, A. A is a young mother (her baby was just born about a month ago) who wants nothing more than for her family to be happy. She is worried about her husband, who, because of a series of sad events, has stopped believing in God. She is afraid that maybe one day she and him will get separated (not because they have a bad relationship, but because most couples end up getting separated here), and she is just looking for the opportunity to unite them. She is very interested in the idea of an eternal family. I am so glad that we can be a blessing in their lives so that their family can be happy.

We had our interviews with President Cordova this week and he and I talked a little about families that I have been able to help teach so far. S and M are preparing to be sealed in August. B and B in October. D and D are also preparing. L already went to the temple and was sealed. B will get sealed to R as soon as he completes a year of being deceased, and several others are preparing for the temple. I am grateful for the oportunity that I have had to help people come closer together, and fix broken families and mend broken hearts. That's really what this gospel is for. Fixing things. I know that through the atonement of Jesus Christ, anything can be fixed, and made as good as new, or better. That's the whole point.

Anyways, that's all for this week. Talk to you later,

Elder Thompson.
Posted by Cordell Thompson at 3:41 PM No comments: