April 27 in Carlos A. Carillo

First off, sorry I don’t have a lot of time again. Seems to be a trend. Haha yeah but anyways literally nothing new happened this week. I feel kind of at a loss for words. Some weeks are just like this though. Anyways changes were today but as expected, Elder J. and I are still together.

So this may be my last 6 weeks here in Carrillo and then I could be going to a new place again! I wanna make this last six weeks as good as it can be, and so me and my companion are going to start skipping language study in order to work an hour more in the morning (we’re both basically fluent anyways), and we’re going to make a really hard change for two gringos: we’re going to speak pure Spanish in the street. Along with some other changes, and we should have a great week! Anyways, that’s all this week, I’ll send more next week!

About Carlos A. Carillo: They have shops here all over the place that sell fruit water. They basically take water and fruit, put it in a blender, and then it’s done. It’s the most amazing thing ever. There are very few wild parrots here. There is a grove of large palms nearby where some live, but we almost never see them. I’ve seen them once in three months. Lots of people own pet parrots, and I’m talking the BIG green ones, and they’re like, almost as big as a small cat. Bigger than rats. They almost all cuss at everything in Spanish.
Posted by Cordell Thompson at 4:24 PM No comments:

April 20 in Carlos A. Carillo

So this week I don’t have much time either. Sorry. This is the last week before transfers and last P-day with Elder H. He’ll get transferred this next Monday. So we wanna have lots of fun. Anyways this week’s been great.

We're focusing on enduring to the end. That means keeping the commandments and going to the temple. Going to the temple is very important. A temple is a sign of the true church of god. In the Bible they all had temples. But many people misunderstand what a temple is. They think it’s just a chapel. That’s not the case. It’s a more sacred building, a literal house of God.

That’s why in Peter (New Testament), it talks about doing baptisms for the dead, because it is necessary to be baptized and then sealed in order to have this family for forever. The people who didn’t have the opportunity in this life to take on the covenants with God, can do it in the next, through their relatives. That’s what the spirit of Elijah means in the last chapter of the Old Testament, that all people who ever lived will have the opportunity to have these blessings and be an eternal family.

Posted by Cordell Thompson at 8:34 PM No comments:

April 13 in Carlos A. Carillo

Sorry that I haven’t sent out very many emails or anything like that. Today we’re going to play Risk at 2 and we just finished playing Monopoly. (I won because elder Hourigan forfeited. :)) Anyways so I’m kinda throwing yall under the bus for a board game. Hahaha naw, just kidding, it’s just that as missionaries, we don’t have a ton of time to relax, and sometimes we all just need to.

This week I had one experience that I’d like to share. We met a woman named M. Anyways M. is about 50 and there’s something very special about her: she’s blind. She lives in a tiny little house that’s barely more than a chicken coup with two distant family members. She was a referral from a member who doesn’t go to church so often, and well, we’ve gotten to know her pretty well. She was a very independent woman in her 20’s. She didn’t want kids or a family or anything. Then, she changed in her early 30’s. She got pregnant. (I doubt she was married, people here rarely are.) And then, her child was stillborn. Over the pregnancy, her eyesight gradually got worse and worse. Right after she gave birth, she lost her vision completely. And then she was left with nothing, and came to be where she is today.

We taught her how to pray, starting with teaching about Heavenly Father, and she prays all the time now. She says she likes to pray partly because when she prays, she remembers the color of the skies. The other thing she likes is how she feels when she prays. She says that from the first time we had a prayer with her, she just feels so beautiful. M. wants to come to church.
Posted by Cordell Thompson at 6:19 PM No comments:

April 6 in Carlos A. Carillo 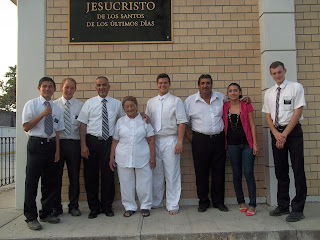 EASTER: A member fed us. It was pretty good.

WEATHER: Spring does mean heat waves for us. I’m dying. (And it’s not even August yet.) My hiking boots (I wear them almost everyday) prolly only have 3-4 weeks left.

FRIENDS: Get over not wanting to study or work "too hard." Being here in Mexico, I have learned that the saying “ignorance is bliss” is exactly NOT true, and you should study and work your butts off in school. I wish they’d had tests while I was in seminary like they do now.... I wasted too much of my time in seminary...

GENERAL CONFERENCE:
.... So Conference was this week. I wasn’t really able to see much of Conference, because the Internet connection was awful. More pauses than plays. The Internet is sorry here. They give us the Liahona every month, so basically I’m just waiting for that, to read all the talks.

General Conference is really important because it’s when the prophet and the apostles talk to us. And well, that’s important because their words are inspired of God. This is the only church that I am aware of that claims to have modern prophets and apostles who receive direct revelation (communication) from God. In other words, it’s the only true and LIVING church.

When Jesus came here to earth, he came to effectuate the Atonement, which was his suffering, death, and subsequent resurrection on the third day. In the suffering, He passed through more than you can possibly imagine. Imagine every pain you have ever felt physically. Now emotionally. All of your fears. All sorrow, anguish, despair, doubt, exhaustion, all of it. He passed through all of that for you. He felt it. And He didn’t just feel it for you but for everyone. Someone had to pay the price for the sins that we would commit so we could return to our Heavenly Father. That’s the whole purpose of Christ!

He always said that straight and narrow is the way, and the gate, and that there is only one Lord, one faith, and one baptism. This leads us to understand that there is only one way to take all that He did for us, only one way to live, only one true baptism, that would permit us to enter into His rest. So, naturally, He also taught us His way, and He established His church to keep us on the path. He sent prophets to teach and guide us, and established His church around prophets and apostles, who could communicate with Him by their divine authority.

But, as the Bible and history tell us, the prophtes and apostles of His day were slain, and the true way was taken from the earth. Without them, we could not find the way to return to the Father. All the religions that were left were shells of what Jesus had taught, without the divine authority or organization to lead and to be guided by Christ. They were, essentially, creations of men, and men alone cannot reach the heavens.

If it had stayed like this, then all of it, His death, His suffering, would have been in vain, for us that have come after Him. But that is not the case. He has provided the way. He has restored that way to the world through His prophet Joseph Smith, who, by the power and authority given him of God, restored the true church, which now holds the truths of the everlasting Gospel of Christ. And every six months, these apostles and prophets, men chosen of God, give us counsel, teach us Christ’s doctrine, and keep us on His path. They testify of Christ, and that’s why General Conference is so important.