Well it was a really crazy week! We worked really hard and definitely saw some miracles! We got the opportunity to watch the dedication of the Tijuana Mexico Temple this Sunday! That was awesome. I feel particularly privileged to have been able to see 2 temple dedications in my time on the mission, Tijuana, and the rededication of the Mexico City Temple.

Temples are super important, especially for those who say they believe in the bible. If you believe in the Bible, then listen up! Since ancient times God has had his children build temples. We understand that the ark of the covenant in the Exodus story was a traveling temple. King Solomon also built a temple, which is the one most frequently mentioned in the Bible, I believe. I think some people might misunderstand the purpose of a temple. A temple is not a church, nor a chapel, nor what the Bible and the Jewish people refer to as a synagogue.

A temple is something different, something more. The word temple is greek for "house". In ancient Israel the temple was literally the house of God. A temple is a house of the Lord. He may dwell therein, if He so pleases. No wonder Jesus said "make not my Father's house a house of merchandise." If a temple is a house of  God, it is an extension of His holy kingdom. That means that no one should enter therein unless he or she has been washed clean by the blood of Christ, through repentance, faith, baptism in the name of Jesus Christ for remission of sins, and obedience to his commandments thereafter.

Why is it important that we have houses of God here on the earth? How does this bless us? In holy temples, the houses of the Lord, we prepare to meet our Savior after this life. There, in those holy temples, we receive a fulness of the blessings our Heavenly Father has for us. In the book of Matthew, chapter 16, verse 19, Jesus says to Peter that he will give him the "keys to the kingdom of heaven", that whatever he "binds on earth shall be bound in heaven and whatever (he) loose(s) on earth shall be loosed in heaven."

Let's take a moment to study this. What things are "bound" here in this life, that can make no claim on being bound in the next life? I can think of one thing. Traditional marriage ceremonies acknowledge this limitation in the phrase "till death do you part".

The family is one of the most marvelous blessings that God has given us, and that's why he gave Peter the power to bind families "for time and all eternity". This is a sacred ordinance, a covenant that one makes with God, authorized by someone who has power and authority act in God's name in these things. In temples we prepare to meet our Savior after our mortal life.

Family bonds can only be made eternal in a sacred temple. Why? Because families are the biggest responsibility that God has given us, the source of the greatest joys, and sometimes, for some people, the greatest trial. His plan was not to bind people in a painful situation forever. So what's the answer? A covenant with Him, where he sets the terms and tells us how we should live together, in love, service, and fidelity. If both parties keep His commandments and do their best to honor each other, they find happiness, and he grants them this blessing, the largest of blessings, a continuation of their relationship forever. No one who lives worthy, through the grace of Christ, of this receiving this blessing of an eternal family will be denied it, though not all deserving people receive it here on earth.
Being bound by His authority and living the way he asks us to is the ONLY way to have a family after this life. This is what we're here for, this is what YOU are here for. I'm just repeating what His prophets have said since the world began. (Read Malachi 4. It's only six verses.)

That's why The Church of Jesus Christ of Latter-day Saints builds temples. Only there can marriages be given power to become eternal. The authority that Jesus Christ gave to Peter exists today. It was restored to the earth to Joseph Smith by Heavenly messenger, and passed down to us today through latter-day apostles. It was lost to the ancient church when the apostles were killed. Their authority is restored today. The temples are real. Eternal families are real. Joseph Smith really was a prophet, an instrument in the hands of God to restore to the earth something important as eternal marriage. I this is true by the power of the Holy Ghost, just as anyone who asks God, the Eternal Father, in the name of Christ, may also know.

Merry Christmas everyone!
Elder Thompson
Posted by Cordell Thompson at 6:12 PM No comments:

Wow what a week!

Well this was one crazy week! We worked really hard, but, unfortunately, not a single investigator came to church with us this weekend! That's the first time I've had this happen in over 8 months! But it's all okay, because it was like a wake up call. We had grown complacent and weren't teaching as often with the members. All the elders in my district are excellent missionaries! So this week we have over 8 scheduled visits to investigators with members along! I also talked to the investigators about why they didn't come to church and it's okay. Felix is going to be baptized this Sunday, if all goes well.

This week I was really struck by the talk that President Uchtdorf gave in the Christmas Devotional. He told the story of how a man who couldn't walk was gifted a wheelchair, and the difference it made in his life. It teaches the importance of service. A Book of Mormon prophet, named King Benjamin, said: "When ye are in the service of your fellow man ye are only in the service of your God." I'd like to talk about this.

The point of this life is to give selfless service. Let me explain why. We are told in the book of Matthew by the Savior that we should be perfect, even as our Father which is in heaven is perfect. So if I want to be a good writer, what do I do? I write. If I want to be a good basketball player, I play basketball. But what does God do, that we can emulate, to become more like Him? We learn from another Book of Mormon prophet, Nephi, that God does all things because He loves the world. Then in John He tells us that God so loved the world that He gave His only begotten son. Everything God does is for us. In other words, God spends His eternal life in service to us. Loving us every day, blessing us so that the sun does rise, so that the rain does fall, so that we have something to eat and to drink, giving us our families, everything. We often take it all for granted, but really everything we have is from Him. Furthermore, the Savior also said, "he that wants to be the greatest among you shall be your servant."

So how can we follow the divine comission of the Savior Jesus Christ, and love our fellow man, in perfection, like our Father? By giving heartfelt service, even as He did, every day of his life!!! In this Chirstmas season, I challenge each and every one of you to give heartfelt service to someone who really needs it, and watch how happy it makes you!

Miss you alll, have a great week,
Elder Thompson

Posted by Cordell Thompson at 9:31 AM No comments: 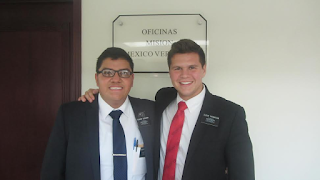 Me and Elder Segovia!

Wow what a week!!!!! This week's been crazy! My first week training, and it's been really tough! I didn't realize how much I depended on my companion until I got a brand new one who doesn't know anything "mission" yet! I also realized the responsability that I hold, being a trainer. I literally influence, to a certain degree, the future of my companion as a missionary. He teaches the way I do. I'm his example, which means I've gotta be super good. I'm trying but I know that I'm far from perfect and I'm going to mess up. I just hope that God's grace is enough for Elder Segovia to learn what he needs to from me, but not follow my example in what I could do better.

There was also another eye opener for me this week while I was studying to give the district class. I realized that we need to work on the commitment process! When people decide to read the scriptures or pray, or go to church, and strive to prepare themselves for baptism, they fulfill the promise set by the Savior in John 7:17. If we do the will of the Father we will know if it is His doctrine or if it's just something of men. How can we know if these things are true if we haven't done them? We cant! It runs in line with what it says in Ether 12:6. We recieve no witness until after the trial of our faith. Otherwise, we wouldn't need faith, and this life wouldn't be a test! And we couldn't grow at all!!! So what's the solution?

Jesus explains the doctrine through the prophets, old and new, and we then have the choice to act, to serve one of two masters. We cannot choose to serve neither. We must be bound to someone, be it the father of lies or the Father of our spirits. So we live the doctrine, and if it's of God, then as we live it we'll know!!! And if we, as missionaries, do not invite others to come unto Christ through making sacred baptismal covenants or even through basic repepntance like coming to church and reading the scriptures, then how in the world can we help people? That's not fulfilling our purpose! Our purpose is to invite.

I hope that as I and all of us strive to better invite others to come unto Christ, that we can be lights unto the world, even as Jesus said. That light that is shared is not literal physical light, rather, it is spiritual. Our happiness and peace as a result of living the teachings of the Savior of mankind radiate outwards to others and they notice it, even if we don't notice that they do!

Miss you all, talk to you next week!
Posted by Cordell Thompson at 9:29 AM No comments: