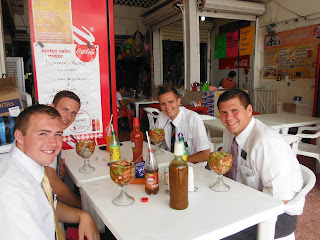 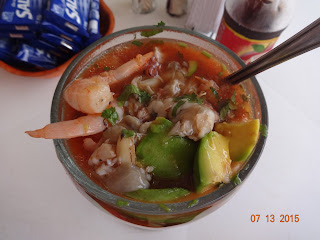 Other stuff that happened, we ate pizza like, 4 times this week. I'm almost getting sick of it. Almost. Not quite. I could eat another. They only have pizza in the port (where I am) in Cordova, Orizaba, and Tuxtepec. Sooo.... about half of the mission doesn't have pizza. Changes are coming soon and I will almost certainly be leaving, and if I do that means I'll be going to a new area, prolly way outside the port. The food here is excellent. I'm very lucky right now. Everyone here is surprised when they hear that in the U.S. we don't eat with tortillas at every meal. There are also people that think all Americans are cowboys.

There's something weird that happens to me when I get on here to write, I like, can't really remember what happened during the week except for the really big stuff so.... nothing really important happened this week. But somthing cool happening this Saturday is that Elder Christofferson, from the Quorum of the Twelve Apostoles is coming to talk to us this Saturday morning. I'm super excited!

We get to see the broadcast of the Mexico City Temple rededication in September, which I am super excited for.

I miss you all and have a great week!

Posted by Cordell Thompson at 6:07 AM