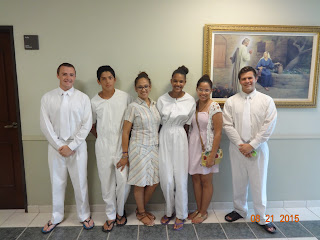 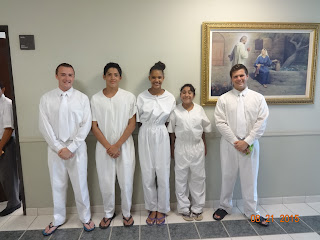 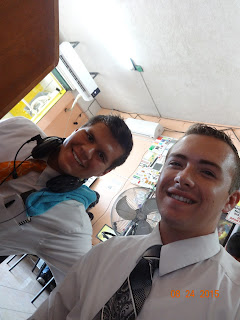 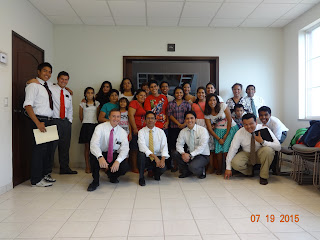 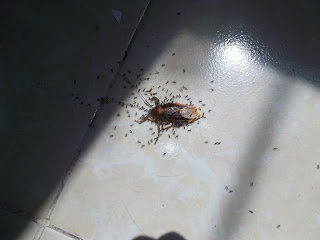 It's nice to live in Mexico because we have our pet ant clean up crew for all the nasty cockroaches. Dead raoches are gone by the end of the day. hahahahaha

Well it's been an awesome week! Sorry for not having much to say last week but... I just didnt' have that much to say. I have more this week. :)

We had another miracle this Friday, in the baptism of G, N and T! All of them are actually from the states and their first language is English.

I'll talk about G and N first. They live with their mom and older sister. Those two are members. Their mom went over to the states (I dont know why) in her late teens/early 20s. She and her kids moved around from place to place in the southern United States while the three of them were little. Then, (once again I don't know why) they moved to Salt Lake City. They lived in the basement of a family of Latter-day Saints, and after a time accepted invitaions to go to church. With time, the mom and older child decided to get baptized. G and N were still too young to get baptized. Then, they ended up moving away, buying their own house, and fell away from the church. Because their grandma got really sick, they moved back here to Mexico, and started caring for her. The mom works as an English teacher and a hotel worker, and provides for her three kids. G and N have had desires to come to a church, and have gone to various, but wanted to go to the right one. They found us, and we started teaching them. With dedicated reading and study of the Book of Mormon, they both came to believe that the book is true. And so they got baptized! We're super grateful to have met them and been this help in the lives of this family.

T was born in LA. She moved here about 6 months ago. Once again I don't know why. She's living with her dad's girlfriend, K, who is also investigating the church and wants to get baptized, but she has to wait until T's dad comes down from the states so they can get married. Anyways, they were already talking to the missionaries in another ward, but moved here and so we got to teach them! T read the Book of Mormon and knows that it's true and therefore decided to get baptized! She feels like the ward is her family and is super grateful to be here. (Will send picture next week.)

Another cool thing that happend this week was that we got to speak with Elder Christofferson, who is an apostle. For those of you who don't know, an apostle is a special witness of Jesus Christ, a prophet, seer, and revelator. When Jesus established His church in the ancient days, He did it over the base of profets and apostles (Ephesians 2:20) indicating that after that manner the true church was to be governed. This is in accordance with the ancient use of prophets in the time before Christ, as shown in the Old Testament (Amos 3:7). That is because when God acts, He acts through them; the prophets and apostles. He established His church over this governing body because they hold the authority (called the priesthood) to govern His church. He gave this authority to them before he was crucified. Unfortunately, after the death of Christ, the people eventually rejected his prophets and apostles, and killed them, thus removing the essential chain of command that kept them linked together under Christ's will and true doctrine. Though the Bible existed, it was impossible for men alone, without divine communication to apostles and prophets, to always correctly interpret it. Thus there were sects broken off from original Christianity, until we come to the world we live in today, where we see that there are many different sects and doctrines, and we know that all cannot be right, because there should be "one Lord, one faith, and one baptism."

God solved the problem of spirtitual darkness by calling Joseph Smith as a prophet and restoring unto him the priesthood, or the right and power to act in the name of Jesus Christ, in order to bring about the salvation of His children. He directed Joseph to call 12 new apostles, and provided the Book of Mormon as reassuring proof of the work that he had done among us. I don't care how much criticsm or how much "evidence" that there is that these things are false. The simple fact is that it's true. I've read the Book of Mormon, and as it directs, I have prayed and asked God if it is true. I've done it many times, and He has manifested to me its truth by the power of the Holy Ghost, just as promised in the Book of Mormon. No man could have translated that book without inspiration from God. Joseph Smith was a prophet. The church has been restored, and will never again be taken from off the earth. That book stands as proof that God exists, that Jesus is the Christ, and that He has restored His kingdom in these latter days, just as promised.

Jesus has done this in order to further his work, which is "the immortality and eternal life of man." It is His work and His glory, and I know that He does indeed glory in it. It is the source of all happiness. These things are restored so that the words "until death do you part" can be invalidated, eradicated, and "for time and all eternity" can replace them. He has power to bind on earth and in heaven, and He has given it to his servants (Matthew 16) and He has restored that power today, so that families are no longer lost after this life, so that we may exist forever with Him. I know these things are true and what I do every day is declare them to every living soul who will listen, so that they too may come to this knowledge, of a God above and of true and lasting peace and happiness.

In the name of Jesus Christ, amen.

Love you guys! I hope you all have a wonderful week!
-Elder Thompson
Posted by Cordell Thompson at 7:20 AM